With a tin of cream-crackers, we received a white, square plate, free. It had 'Jacob's' on the corner, and an ugly design all over it.

SO: I decided that it would be a perfect place to paint some blue roses :)

First, I did the background - and it had to be in black, mainly, to cover the name and the icky design. But, all-black is so blah, so I added patches of blue and red.

Then, it was time for the roses. My favourite rose is the blue rose, so that's what I painted:

I'd also made a name-plaque for my nephew. It's hard to do something for a boy - flowers seem so, well, girly, don't they?! 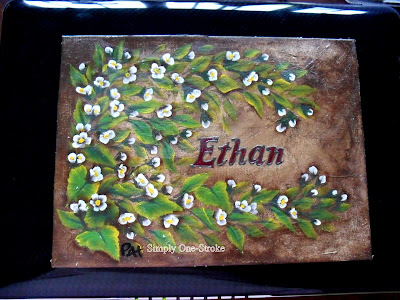 So, I'm in the process of doing another ... and here's the background, already completed, and waiting for me to put in his name, and finish it: 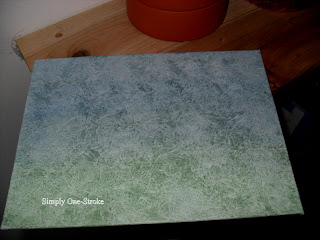 And this is it, with his name added, and one-stroke leaves. More-for-boy, I think. Sigh. Actually, I simply don't know :( 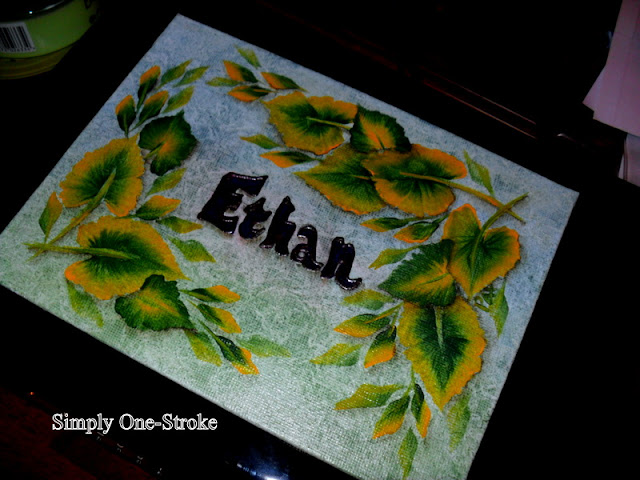 For Ellen and Rowena

My nieces will be coming to visit :) 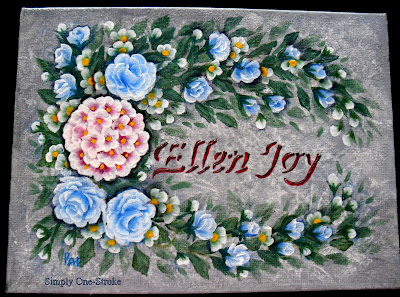 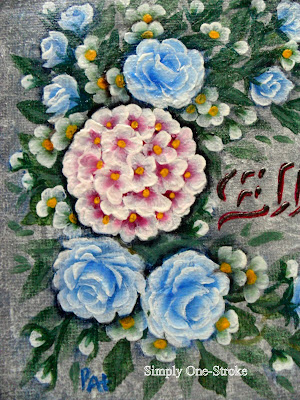 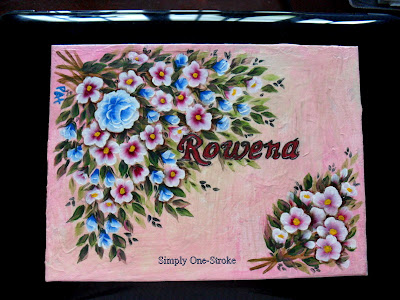 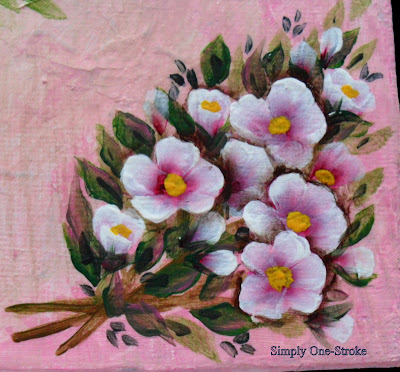 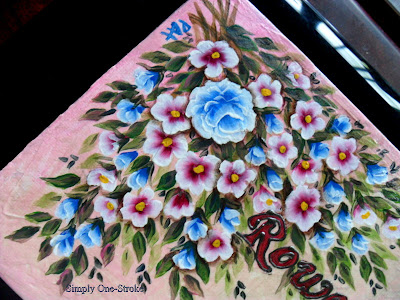 Have you guessed their names, yet?!
Posted by Pat 2 comments:

I was bored with my door, and decided to re-do it. Go see how it used to look here!

What more needs to be said?! 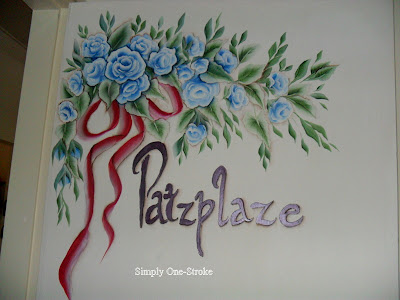 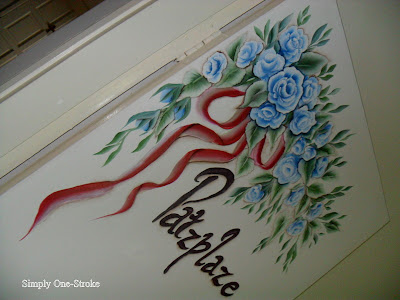 Renewable green artist paints an old French chest that she picked up at a yard sale!

Because Vijaya's kitchen is purple, that's why!

Vijaya comes help me around the house once a week. And she asked that I paint her something - on this Nescafe bottle. Did she like roses? Yes. And what colour roses would she like? Purple!

So, here's the finished bottle.

I'd have liked to put in some other little flowers as well, but, there was just so much purple, that I stuck to roses and rosebuds. I'll put in more flowers on the next one I paint for her.

What's she going to use the bottle for? For Nescafe, of course! She buys the refill pack, so this bottle will come in handy.

AND, since she was planning on using it for coffee, I thought that it would be practical to leave little stripes - or strips - of empty glass: so that she could just glance at it, and see when it's time to buy more coffee :) 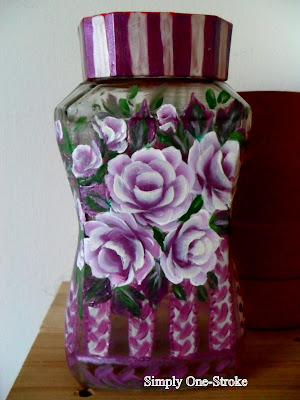 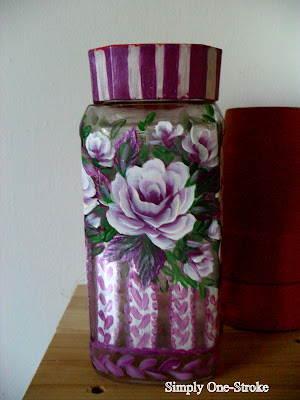 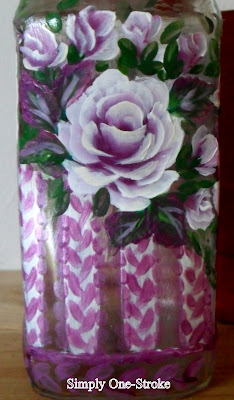 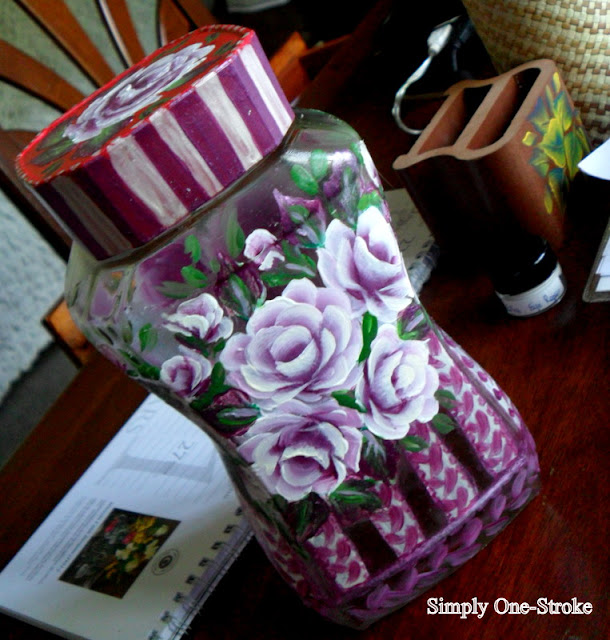 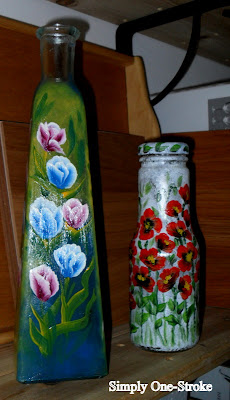 This one's an old olive-oil bottle that lost its pouring spout: 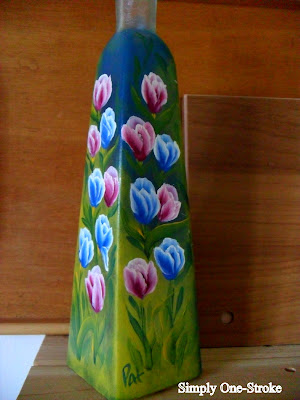 And this one, a fruit-drink bottle that will now be recycled as a water bottle for moi ;) 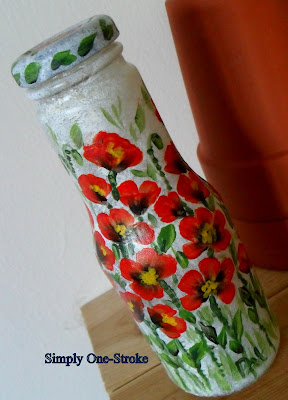 I finally dared myself to paint poppies - not just dashes of colour, but with some petal shapes and leaves (not the right leaves, alas) - but I will try them again, and try to do a better job of it.

And the tulips: they are far harder than I think they will be!!!

How to: A golden rose

This isn't how I paint, but I find that if I keep watching, I always find out something I can use, and something new to learn.

Gary Jenkins paints like it is effortless. It isn't. And he has a wonderful way of narrating every stroke he adds, and every colour he dabs on. He is a pleasure to watch!

Spring is in, and everywhere there are flowers. When I was in London, I was amazed at seeing tulips for the first time, and here, I try to reproduce what I saw: 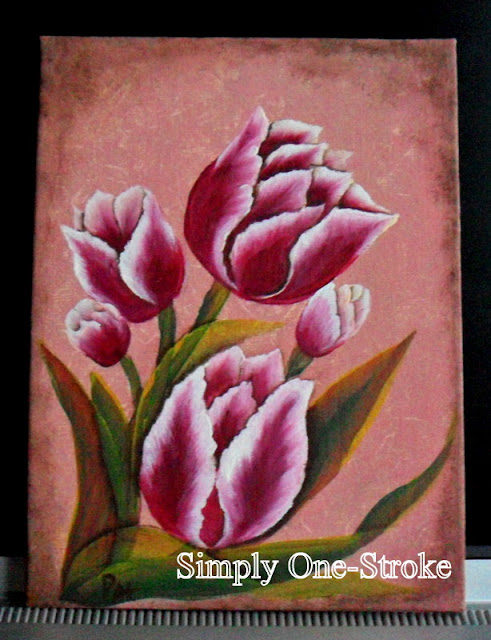 I MUST learn to use the right-size brushes. I struggled with my tulips because the brushes I'd chosen weren't the right size. I'd forgotten what Donna Dewberry always says: Use the biggest brush you can! How could I have forgotten?! Stellar advice that I won't forget again.
Posted by Pat No comments:

I have a post called 'making it pop' and I often forget to listen to the advice given there :(

So, after finishing these two rounds, I still felt that they were missing something, until it clicked: shadows!

So, I put them in. And as I was doing them, I remember a video I watched of David Jansen, and his advice there came back to mind: seal each layer as you are finished with it. Of course, he was doing a major project, and he was finishing it was an antique look of the old masters... whereas mine were just my two rounds and I was just playing around! Hahahah!!!

Anyways, it was good that the pieces were already sealed - because the shadows ran all over the place and, because of the sealant, I was able to either brush them off with a clean, wet brush, or wipe them off altogether with a paper towel :)

I have alternated the pictures here: first the 'un'shadowed piece, and then the piece with the shadow added. I think it makes a difference, and gives depth. Anyways, that's what my eyes tell me. Heheheheee! 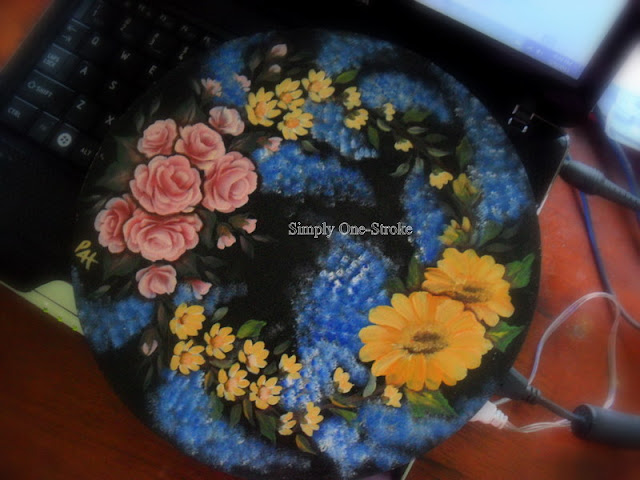 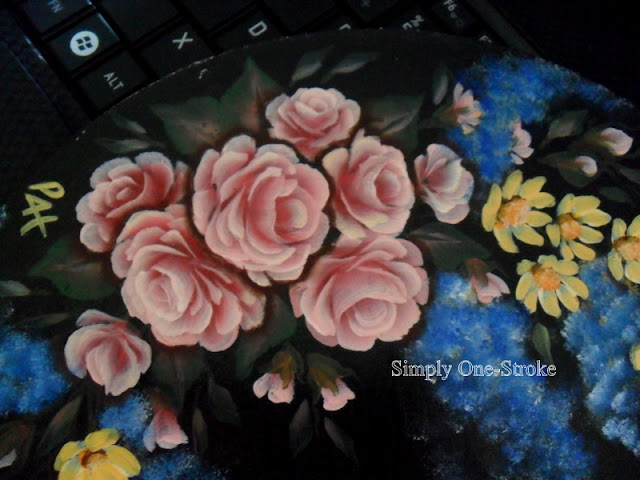 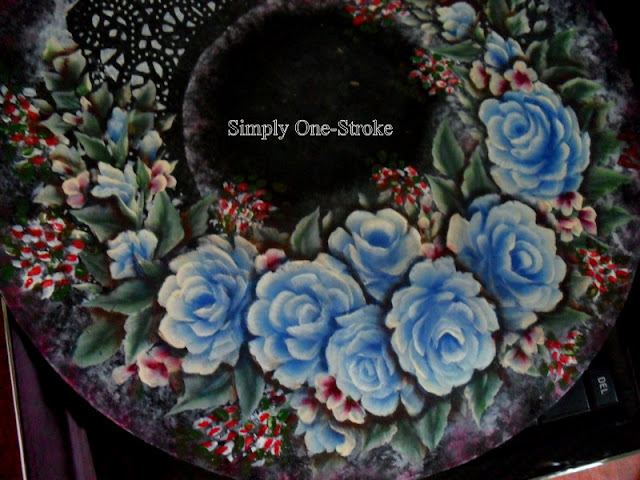 Email ThisBlogThis!Share to TwitterShare to FacebookShare to Pinterest
Labels: shadows

This bottle has been in our family for years. It's a smaller version of the many bigger bottles mum had! I loved these old bottles that were filled with sugar, biscuits, and so many other things :)

Since the cover was looking a tad old and faded, I decided to brighten it up a bit - and ended up painting the whole bottle. With a field of white and yellow daisies, and poppies :) 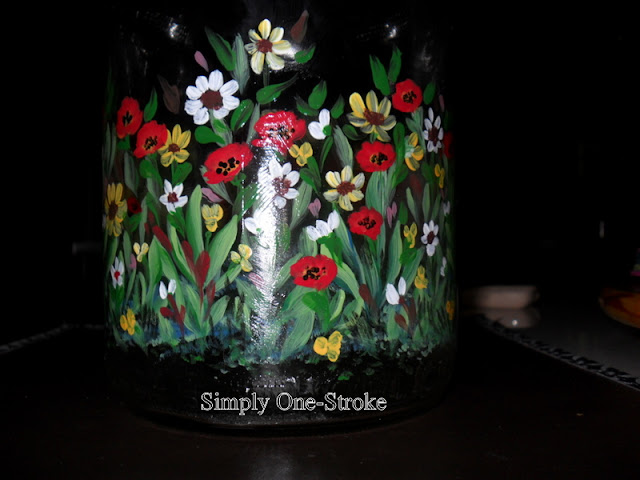 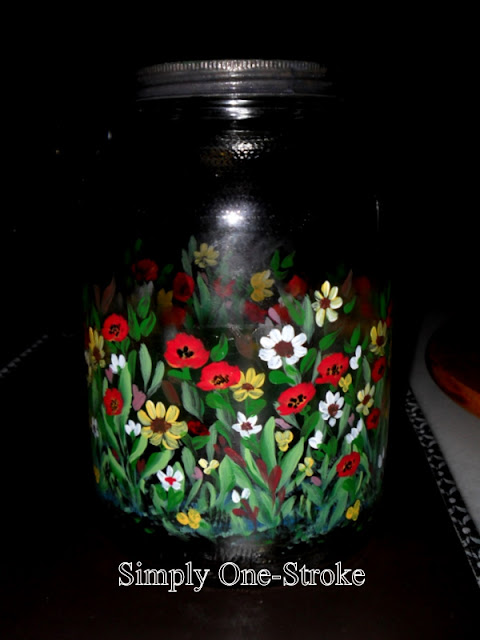 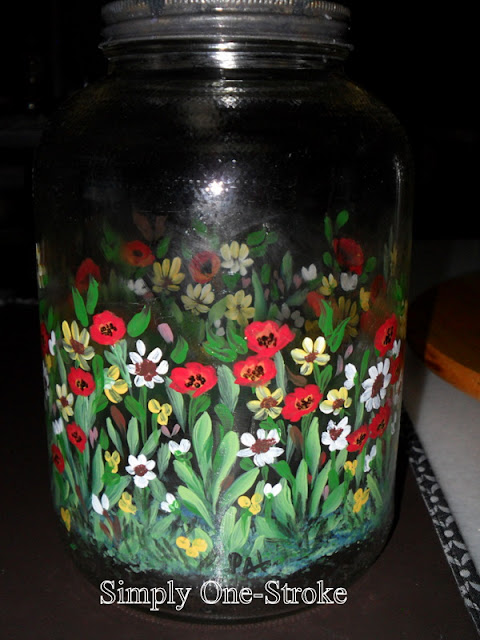 It was a quick, fun project, with nothing major or complicated, and I enjoyed doing it!

... another old soy-sauce bottle gets the works. This time, in metallic paint.

I made a boo-boo while I was scrolling away, and so it had it be transformed into a black flower-of-sorts :(

I need to work on my scroll-work, and make longer scrolls, and vary the designs. Right now I'm in a more-of-the-same mode. 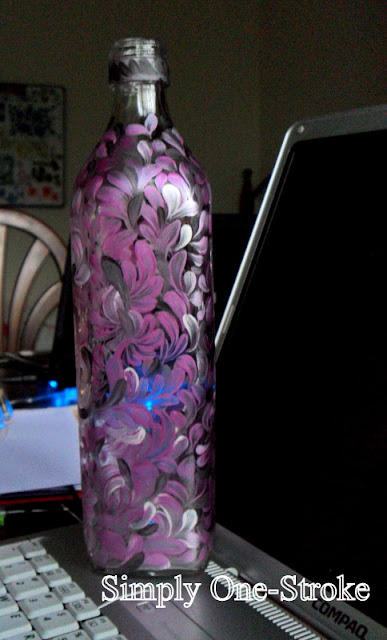 And here's the other bottle I did, in almost the same colours, though not quite...

... nestling among the other stuff on a shelf :) 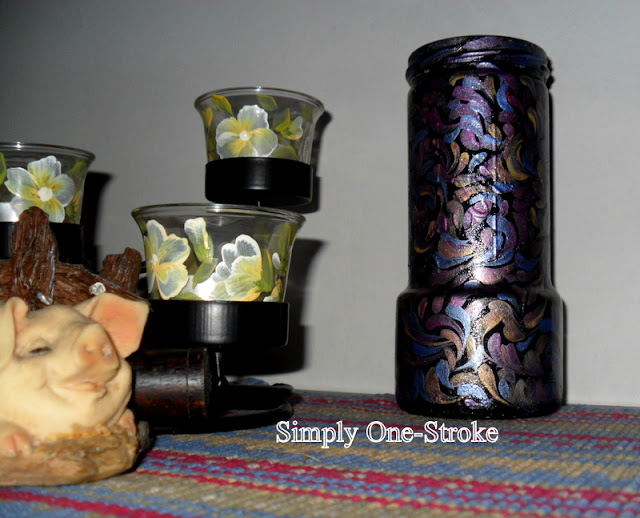 The bottle is here - and still a work-in-progress.

Here is how I finished it: 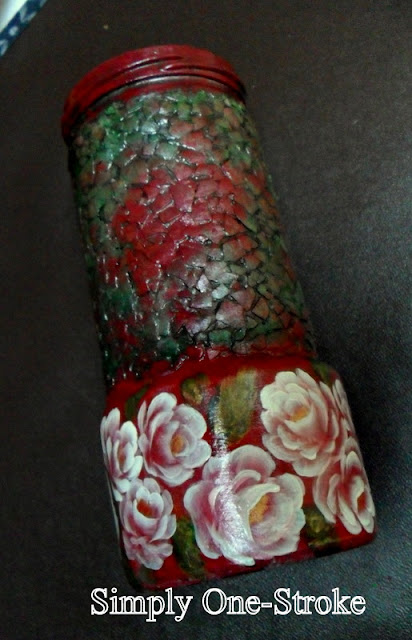 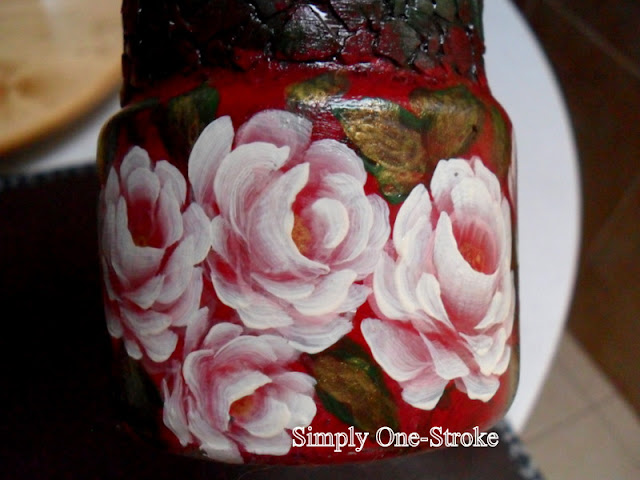 I wanted to do the doily stencil that I've seen, but I did it wrongly: and instead of making the background white, I did the reverse. Hence, my black doily.

I am not the world's greatest stenciler, so there were lots of missed bits, and blothches, and not-so-pretty places.

The lot was covered with my favourite flower - the blue rose - and there are lots of them, as you can so plaintly see here.

Well, this is my first try with the doily, and I'll remember the lesson I've learnt :)

Email ThisBlogThis!Share to TwitterShare to FacebookShare to Pinterest
Labels: blue roses, round

Flowers in a round 2

This is '2', because the original work I did is here.

I re-worked this piece a little, and then sealed the work in Mod Podge. I think it looks better, but, maybe only I see the difference :( 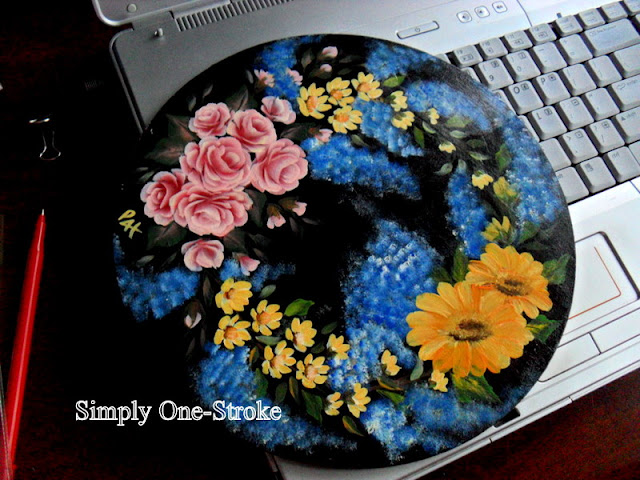